Why Trump Won (According to Law of Attraction)

I have been a student of the Law of the Attraction (as presented by Abraham-Hicks) for approximately ten years. I have been an avid student for about a year and a half because I’m finding it is everything.

The Presidential Election of 2016 is a perfect demonstration of these teachings and here is how:

Law of Attraction basically says, “where attention goes, energy flows.” And where energy flows, there is the manifestation on the vibrational level first, then on the physical level, or what we call “reality.” Thoughts are energy. Humans are constantly creating with their thoughts and actions. Bottom line: when you think about what you don’t want, you send energy in that direction and therefore aid in the manifestation of it.

From the beginning of this election, Trump was the focal point. There were countless articles, insights, skits, commentaries, conversations, rhetoric, and heated emotion regarding the prospect of having a “Trump Presidency.” Sure Bernie and Hillary had their moments, but it was not enough to overshadow people’s shock, awe, and intrigue over Trump’s actions, words, and presence.

From the beginning, this election was either a pro-Trump or anti-Trump election, and the Universe only read that as “Trump” and “Trump.”

I know to look at this election in terms of “energy” may seem simplistic, but the Law of Attraction is always at work. After all, everything is energy. It has to have a vibration first before it can manifest into the physical or “real.”

While the energy flow seemed strong in Hillary Clinton’s campaign on the few days just before November 8th, there were still signs of Trump’s win on a vibrational level everywhere. Even Clinton’s campaign, #lovetrumpshate, gave Trump the upper hand. His very NAME was in HER campaign! Think about it: if Rip Van Winkle had woken up in the middle of this campaign, he would have definitely assumed that was Trump’s tagline, not Clinton’s!

Let me clarify: in my work as a Feng Shui consultant and a basic “reader of energy,” I’m keen on the messages that words have in a household or office. For example, one client had a peppy little sign in her home office that read, “Never never never never give up.” Well, the psyche sees “give up.” The subconscious can’t visualize in negatives. For example, “Remember to pick up the dry cleaning,” is much more productive than “Don’t forget to pick up the dry cleaning.” There is power, energy, and forward momentum in the word “remember” and, well, “forgetting” in the term “don’t forget.”

People were so repulsed by Trump that a momentum of energy went directly his way. The “horror” of a Trump Presidency played over and over in the minds of the American psyche that it manifested into being.

If we focus on the sort of candidate we want and the kind of country we want, then energy will flow towards that, and it too will manifest.

We are Creators in a fluctuating and ever-expanding, evolving Universe. Shift can happen, right this very moment. The best way to determine what you are creating is to check your emotions. If the thought feels badly, you are either 1) thinking about something that you don’t want, or 2) you know what you want, but you don’t believe it can come into being and therefore you’re “putting resistance into the stream.”

Take heed though! Well-being dominates EVERY time. We simply block that well-being when we forget that and let the negative thoughts and emotions spiral out. And things don’t manifest right away – we do have a buffer of time in order to catch it! Plus, know that the negative emotions and thoughts are GOOD –- they give us great clarity for what we want and a point from which to shift our focus.

The Law of Attraction is a moment-to-moment practice, and I’ve found it to be the most powerful spiritual practice of all. The result and “goal” is happiness – world and personal happiness — which is what we all want!

Take the advice of Bob Marley and “don’t worry about a thing, because every little thing is going to be alright.”  The good news is that if Trump is as bad as some are making him out to be, then we are all energetically creating a President that is as awesome as Trump is not!  It’s Law!

Katie Rogers holds a 9-week Feng Shui Journey Workshop infused with the studies of the Law of Attraction. She’d love to have you aboard for that and/or for the Declutter Your Way to Clarity eCourse, held in January, & the Energetics of Money eCourse, also coming up! 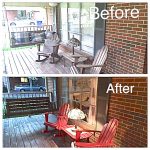