2
I love love.
I really do.
Therefore, the Playing Cupid part of my job is just-so-fun.
For those of you unfamiliar on the workings of a feng shui consultation, when a client comes to me, I don’t start by rearranging furniture.
I start by asking them their objectives, a.k.a. what they want to improve or manifest in their lives.
In this case, this particular young woman – the brilliant Heather Goldberg of Spork Foods – was tired of dating Mr. Wrong after Mr. Wrong, and was finally ready for ever-lasting love.
She wanted the fairy tale ending.
I’d say she got it.  This photo was taken three days ago. 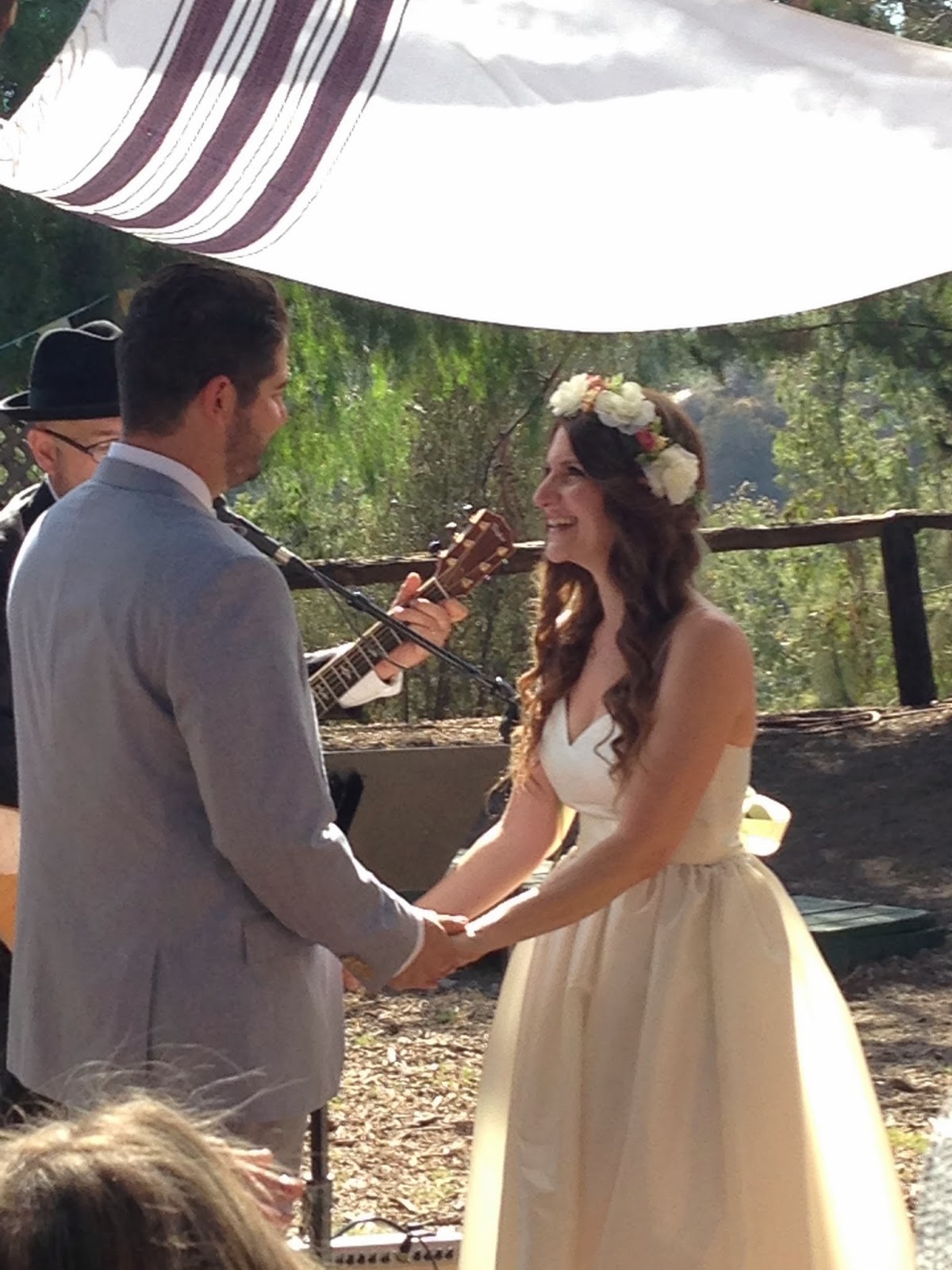 FACT:  Two years ago, she called me for a feng shui cure for romance.
OTHER FACT:  She met her groom THAT WEEK!
Once upon a time very swiftly became happily ever after thanks to some ridiculously simple feng shui cures.
Yes, yes, yes.
I’ll share the cures with you, but only if you read to the bottom of the blog, okay?
Here goes:
1.     She already had these paintings, which are a pair (ahem, a pair is good for Romance), and are the colors significant to the Romance gua. (pinks, reds, and whites). 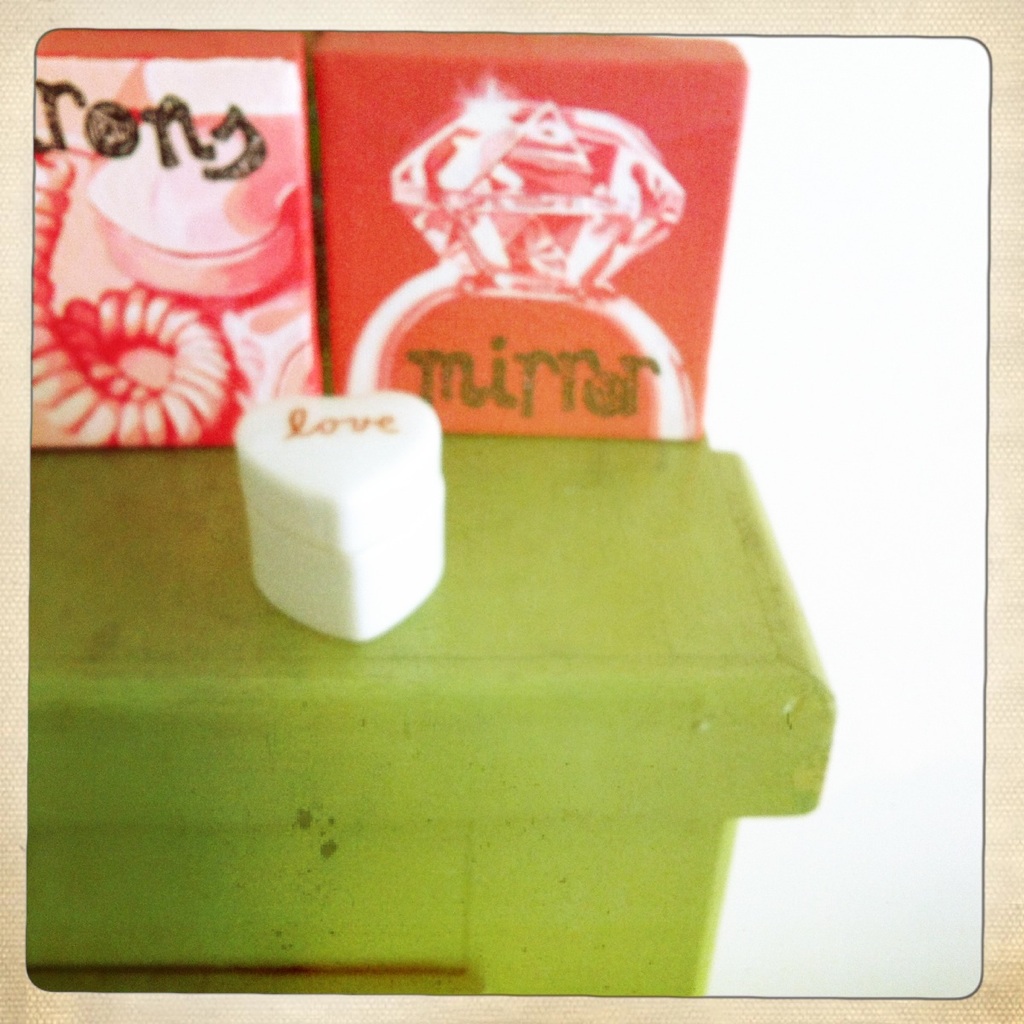 And look!  There’s a diamond ring on them!   While these paintings may not be the typical images for “love and marriage,” (neurons?) I didn’t see anything harmful in its message, so I suggested she give them a whirl.
2.     How perfect!  She already had this box with the word “LOVE” etched on the top.  Precious.  I told her to write down the qualities she wished for in a man on little pieces of paper and place them in there.
3.     Now she had created a little love vignette to attract her future groom!   On the nightstand they went, which also happened to fall into the Romance section of her bedroom according to the bagua map, and VOILA!
….THAT SAME WEEK, she met the man you see standing by her side at the altar.
The wedding was beautiful, the bride stunning and beaming, the groom handsome and grinning, the dancing divine, and the food (vegan!) fabulous, the guests glowing.
Now….here is an interesting side fact, and why I wanted you to keep reading.  While mingling with friends and family at the wedding, I discovered that the fair bride had shared this particular cure to some of her single friends some while back, in hopes that it would work for them too.  You know, the part about making a list and putting it in a “love box.”   Talking to two “participants,” one young lady had had success and found her current and lasting boyfriend, where the other had not.
WHY DOES THIS HAPPEN?  Why do some cures work for some people and not for others??!?!
To begin, Heather was READY.  I mean, ready.  The quality of the tone in her voice when she called me, plus the fact that she went into action immediately setting the cures, helped a lot.  She was razor-sharp decisive.  She wanted to get married.  Period.
Also, the rest of her home was “feng-shui-ready.”  Just because the Romance section is decorated with hearts and lovebirds does not mean that the rest of the home is clear of “romantic blocks.”  For example, take a look at your Self-Knowledge section.   Without a strong sense of self, how can you know what you want in a partner?   Or what about clutter?  Clutter can be the death of everything, no matter where you find it.
The point is, romance, or lack of, can show up in hidden places throughout the home, so please don’t think that adding some pieces of paper to a box is all you have to do!
Of course, in this woman’s case, it worked and her wish came true almost instantaneously, but that was because she was 85% there already…and it showed in her home.
While there may be some layers to go through, and there may be some resistance in implementing certain cures, and a little more effort than placing traits into a Love box, feng shui always yields results in some form or another.
So the question remains:  Do you really want the fairy tale ending?  Or not?
Good.  Because I expect more wedding invitations in the mail, please.  J
A Feng Shui Wedding2014-09-032014-09-03/wp-content/uploads/2015/10/katie-rogers-logo-sm.pngKatie Rogers/wp-content/uploads/2015/10/katie-rogers-logo-sm.png200px200px
Showing 2 comments