Last night I gave my first “Green” Feng Shui lecture at the library in Homewood, Alabama.  Here are the highlights as well as my inspirations along the path of living “green”:

1.  Appreciating nature.
When you have lived and visited the most beautiful places in the world and take the time to get to know the nature there, you can’t help to want to protect it…and be moved by it.

2.  The Redwood Forest and Julia “Butterfly” Hill.  Once upon a time in the 1990s, a 23-year-old woman sat in a Redwood tree because she was tired of big companies cutting them down.  After all, only 3% of these 1000-year-old (plus) magnificent beings were left in the U.S. (the only place where they grow), and she (like me) was touched and awed by their beauty, mystique, and wisdom.  Once up there, she knew that she could not come down until her job was done and her message was loud and clear.  It was TWO YEARS before she set foot upon the ground.

Here is her book about her experience: 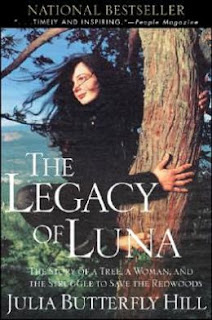 3.  TreePeople.  I was smart and lucky enough to work for this non-profit when I lived in Los Angeles.  Andy Lipkis started it when he was only 15 years old, when trees were being killed by — guess what — smog.  He had a vision to replace the trees….and build community at the same time.  Today, forty-three years later, TreePeople is “planting the way” to greener, healthier cities everywhere.

4.  Diet for a New America by John Robbins.  I didn’t touch on this in the speech, but becoming a vegetarian has not only been the healthiest choice for my body, it’s also been a major contribution to the planet.  This book sealed the deal for me.

5.  Documentaries.  There are so many people putting the message into the world on what is really happening on our planet, socially, politically, economically, and yes, environmentally.
Here is a short list of the ones that have influenced me:
The Corporation
FLOW: For Love of Water
The End of Suburbia
Gasland
Who Killed the Electric Car?
The 11th Hour
Dirt: The Movie
Wall-E  (not a documentary, but a cartoon with a strong, smart, and very real message)

And here’s an extremely thorough list that I stumbled upon:  http://www.filmsforaction.org/articles/films_for_action_presents_the_top_100_documentaries_inspiring_the_shift_to_a_sustainable_paradigm/

6.  Anna Cummins and 5 Gyres.  I met Anna when I was filming CarLess in LA.  She and her husband are on the front lines when it comes to plastic, plastic, plastic, having personally been to sea to research.  Check their mission out here:  http://5gyres.org

7.  Senor Enrique Penalosa.  Another inspiration from my CarLess in LA days, he implemented bike lanes, parks, better public transportation, and car-free days in Bogota, Columbia, where he acted as mayor.  His work has opened my mind to the importance of building cities for people rather than building cities for cars.  Today, his message is worldwide.

8. Costa Rica.  When I was 19, I volunteered with some friends at various places throughout the beautiful country of Costa Rica.  First we helped with the endangered sea turtles, then at an animal rescue reserve, and finally, on an organic farm.  Being exposed first hand, and helping first hand, was fulfilling and wholly educational.  And fun.   No book, documentary, speech, or blog can replace being on the front lines yourself.

9.  CarLess in LA.  This is the documentary that I’m in the process of making.  Again, front lines.  Again, priceless.  I’m proud that I accomplished this feat and of the amazing, inspiring, brilliant, and caring people I met along the way.  Here’s a glimpse:

So what is “Green” Feng Shui?

In other words, how does feng shui apply to our greater, collective “home,” the planet Earth?

Similarly, when we being to become more conscious of our actions affecting the Earth, we are in the process of raising our vibration/consciousness and moving towards greater joy and peace….

….even if we have to “endure” a bit of “inconvenience” in order to do so.

So yes, recycling, reusing, and reducing is good feng shui.

Driving less and turning off your lights is good feng shui.

After all, what if the Earth is crying out to us?  What if all the anxiety, depression, addiction, etc. that our society is prone to has a root cause:  that we are freaking out because we subconsciously know that we are messing up?  Could we all be blocking out her call by our busyness, our pill-popping, and our shopping?  (Note:  This theory inspired by a section in a book called Dream Tending by Dr. Stephen Aizenstat.)

There are many, many people who aren’t satisfied blocking out her call, and they are leading the way in the ways of green.  But the tipping point hasn’t happened yet.

So now that your mind has been stretched even just a tiny bit, what choices will you make?  I believe the tipping point can and will happen.  And how cool is it that this generation gets to be such a huge part of it?

Plant a tree.
Buy at the farmer’s market.
And spread the word.

It’s our collective home, and it will take a collective effort.  And it will be well, well worth it.  I promise.