Tea Recipe to Keep You Healthy!

My first yoga class was in 1998 at a place called Yoga Yoga in Austin, Texas.  A skinny man with a beard dressed in white clothes with a turban on his head had us do strange chanting and fast breathing and other things like make faces like a lion and laugh spontaneously and then we all had to lay down while he played a gong for what seemed like a very long time.

I thought it was the weirdest thing ever.

Then, after is was all over, we were served a cup of the most amazing tea I had ever had.  Seriously.  It tasted SO good to me.

So I went back.  And I went back again.  And again.  Because, although yoga was extremely unusual to my Southern upbringing, I sure did feel good after class and for the days afterwards.  And that tea!  How could I pass up that tea?

That was my introduction to yoga; it was kundalini yoga.  My first teacher was Mehtab (aka Michael), and his classes were quite magical.  And that tea is known as Yogi Tea (or chai), and it’s a recipe passed on from the famed Yogi Bhajan.

I still practice Kundalini yoga, and I don’t think it’s weird at all any more, just awesome.  I now live in my home state of Alabama, and I take the occasional kundalini class here at the various yoga studios around town that happen to offer it.  Recently I was in Akasha’s class at Birmingham Yoga, and he reminded us of the awesome benefits of yogi tea and suggested we make it ourselves.

Wow.  Why haven’t I thought of that? 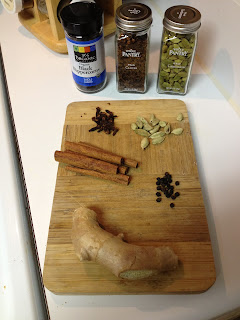 So at New Year’s, a friend and I went to the store seeking out the ingredients, and I now drink this wonderful tea in the comfort of my own home just about every morning.  Because it’s just so darn good!

AND, I have not gotten the flu.  I swear, I think this tea may be the best cold/sick preventer out there.  Be gone, flu.  Be gone, flu-shots-that-get-us-sick-anyway!

So drink up, friends!

When Yogi Bhajan was a military commander in India there was an epidemic among the troops. He ordered all of his men to fill their canteens with yogi tea and drink nothing else, not even water. His Battalion was the only unit that didn’t get sick! Yogi tea purifies the blood, lungs and circulatory system. It cleans the liver and has many more unseen benefits. It’s good to drink this tea every day.
1 Gallon Water30 Cloves30 whole Green Cardamon pods30 whole Black Peppercorns1 inch or more of fresh Ginger, thinly sliced5 sticks Cinnamon1 teabag, Black Tea ( leave out if sensitive to caffeine or planning to drink at night)*Milk and Honey/Maple syrup to taste or Almond Milk.
**Milk helps to ease the shock of the spices on the stomach and intestines so drink with milk if you’re sensitive. Note: for a stronger tea you can let the spices sit and sink to the bottom.
Tea Recipe to Keep You Healthy!2013-01-282013-01-28/wp-content/uploads/2015/10/katie-rogers-logo-sm.pngKatie Rogers/wp-content/uploads/2015/10/katie-rogers-logo-sm.png200px200px
Showing 4 comments