Swiped Bike…and the Good that Came From It

I’m back in Los Angeles, where the flowers are brighter, the breezes are softer, and the skies are bluer. It’s been so lovely to reconnect with my home away from home and, more importantly, the people in it. Yet, one of the sweetest reunions yet, was the one with my good ol’ bike, Trusty, my silver, sleek Trek hybrid that has been patiently awaiting my return.  She stays in LA, and that way, I have no need to rent a car while here.  She’s my one and only – we met while filming CarLess in LA — and she’s been my faithful ride ever since.

I strolled up to my friend Cristina’s house, outside of which I had locked her to a street sign, to see that she was not there.

“Cristina!” I hollered.  She came bounding out of the house (windows are open in LA).

“My bike got stolen.”

I laid on the grass.  I yelled at myself at how stupid I was (the lock I borrowed was not the soundest).  Why didn’t I put her inside the gate?  Why didn’t I use a better lock?  Why did this happen!?

I had a breakfast date in Santa Monica, and my day was planned around a lovely beach/bike path ride to get there.

“Katie, are you sure you want to lay on the grass right there?  There are a lot of dogs in this neighborhood.”

She wasn’t quite understanding my pain.  What was dog tee-tee when my bike had been swiped!

Seeing my distressed, she obeyed.

“Dammit,” I thought and said out loud to myself while laying on the grass.  “Dammit!”

I made myself get up.  I dusted myself off.  I went inside, and I asked for some fingernail polish remover.  Cristina’s roommate, Lauren appeared (a fellow Southerner) and they both expressed their sentiments for my loss then chattered on about something else.

As I wiped off my mermaid green nail polish, it dawned on me that only ten minutes prior, on my walk over to Cristina’s house, I was so happy, and how I was looking forward to a good day, how life can just be swell sometimes…only to turn the corner and to find my bike gone, gone, gone.

Then I thought, “I’m not going to let this ruin my day.  I’m getting over this now.  There’s nothing I can really do.  And Only Good Can Come From This Situation.”

Now this is a favorite mantra of mine:  OGCCFTS.  I learned it back in the day, I think from a little book called the Game of Life by a woman named Florence Scovel Shinn.  It’s a good one to say to yourself when things are looking bleak.  And in my experience, it almost has a magical power.

This time turned out to be no exception.  Read on.

So, as I’m pondering this, Cristina and Lauren are gabbing on about some bike that their former roommate had left on the side of the house.  They said I could use it.  I’m imagining a nasty old thing, rusted to the rims, with no chain and no brakes, that would be a painfully slow ride to Santa Monica.

I sighed, “Maybe.”  And I thought about how a person feels when their dog dies, and someone tries to offer them a new puppy the next day.

They went on: “Manny said that he didn’t want that bike.  He said to just put it on the side of the street. I don’t want it.  Cristina, do you want it?”

Why the hell would I want it? I thought.  But I kept my mouth shut and agreed to go look at it.

Turning the corner to the house, my expectations were low.  But then I saw, gleaming underneath a fine layer of dust, the word Trek.  It was a teal green Trek mountain bike.

“It’s a Trek,” I said, almost in disbelief.  (Why the heck were people passing this bike up?)

[Note:  I rode Trek bikes during my entire time filming CarLess in LA.  I started on a borrowed mountain bike, believe it or not, then bought the hybrid.  So I have a special affinity for Treks, even to the point where I thought about calling the film, Trekking Los Angeles (because that’s what it felt like!)]

I checked the brakes.  They worked.  Cristina grabbed a cloth and we wiped it down.  Sure it had some rust, but this was a FAT bike.  Sure it was a men’s bike, a bit too big.  And yes, the tires were a little flat, but we found a pump, and in a few minutes, I was good to go! 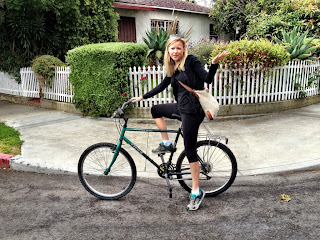 The wonders of life!

Happy again, (but still a little stumped/shocked), I rode off on my new bike, which I quickly and appropriately named “Lucky.”

I rode the bike path under a sunlit sky, and when I got to Santa Monica, at a certain crosswalk, I saw a familiar face approaching.

“Hey Conan,” I said.  (Yes, it was Conan O’Brien, crossing the street, coming towards me.)

The rest of the day unfolded and I must say, it was nice to have my new green good luck charm with me.