Flower Power in One Client’s Decor

A client called for a tune-up.

It turns out she had just kicked her husband out.

This was not something she had ever done before, and while their relationship had its ups and downs, she was sort of in a state of shock by her own action.

Here’s where the idea to call me came in.  You know what she did next?  She shopped!  Fueled rather than falling into a depression, she decided to channel her heightened energy into updating some spots around the home.

She wanted to make sure that the changes she was making were Feng Shui a-ok.

It was a wonderful session, including a Color Reading to help gain a bit of perspective on where she was on a subconscious level.  It turns out that she is in a place of really being true to herself, tuning into her creative talents and most authentic self-expression.  And yes, it came up that her marriage had a block, surprise, surprise.

So we tweaked her space (over Skype, no doubt!), and I approved of some new items and gave tips and tweaks and commentary for other areas, including Creativity and Self-Knowledge.

Then we got to her bedroom.  She had bought entirely new bedding, one that “sparked joy,” (to reference Marie Kondo), and that brought a Spring-like freshness into the room.

Here’s where it got interesting…and tricky.

This bedding was of peonies!  A gorgeous flower to be sure, and one heralded in traditional Feng Shui as THE flower for love!  So how about that?  Things came to a head with her hubby, and she runs out and buys something for her bedroom that shouts love, love, love! 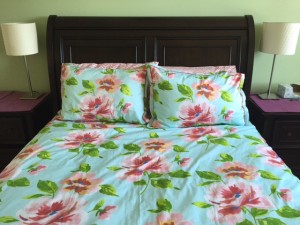 The only problem was this:  This is the perfect flower for a woman when she wants to find a mate…but it’s NOT so great for married couples as it may encourage infidelity!!!

We had a good laugh at the irony of her choosing this particularly controversial bedspread of all the bedspreads in the world.

I then read from Doreen Virtue’s book, Flower Therapy, and we found another meaning for peonies, in that they help heal folks from a distance.

I told my client that I like to play it safe in these type of instances.  She and her husband are by no means talking divorce, but she did need her space for a few days to get her head clear.  So they are in an interesting stage.  She wasn’t too keen on the idea of returning the comforter to the store — after all, she really really loves it!  And it is the flower of LOVE.

So symbolically speaking, why o’ why did this lovely lady bring this in?  Sometimes with a client, it is clear as day what the symbolism is, but in this case, there were several ways to read it and can be a mystery!

Maybe this is her psyche’s way of getting to a purer place with her husband, of claiming her identity as a individual, to spark up a renewed romance with him.  Or maybe it’s her way of claiming her singledom in a stronger way, and a sign for where that marriage is headed.

This is where the Feng Shui consultant steps back, and allows the client to let the information  sink in, so they can decide for themselves.

Who knew dainty, sweet peonies could be so powerful in their symbolism!? 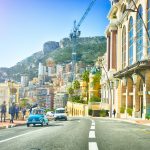 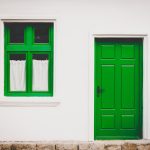 Loving Where You Are, Even If You Want to MoveUncategorized